The Second Future of A.I. Retreat

Kirsten and I spent the week between the 17th and the 21st of September with 18 other utterly amazing people having Chatham House Rule-governed conversations about the Future of Artificial Intelligence.

We were in Norway, in the Juvet Landscape Hotel, which is where they filmed a lot of the movie Ex Machina, and it is even more gorgeous in person. None of the rooms shown in the film share a single building space. It’s astounding as a place of both striking architectural sensibility and also natural integration as they built every structure in the winter to allow the dormancy cycles of the plants and animals to dictate when and where they could build, rather than cutting anything down.

And on our first full day here, Two Ravens flew directly over my and Kirsten’s heads. 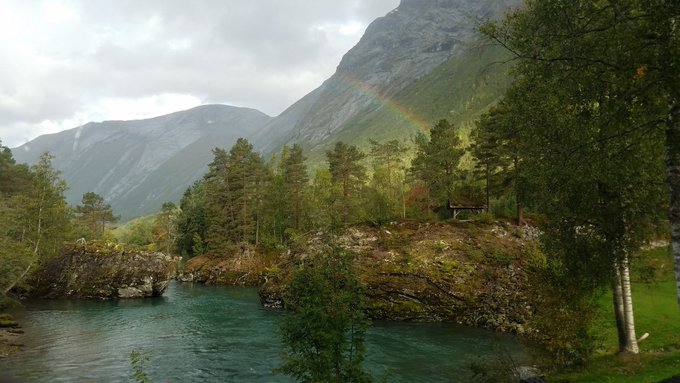 [Image of a rainbow rising over a bend in a river across a patchy overcast sky, with the river going between two outcropping boulders, trees in the foreground and on either bank and stretching off into the distance, and absolutely enormous mountains in the background]

I am extraordinarily grateful to Andy Budd and the other members of the Clear Left team for organizing this, and to Cennydd Bowles for opening the space for me to be able to attend, and being so forcefully enthused about the prospect of my attending that he came to me with a full set of strategies in hand to get me to this place. That kind of having someone in your corner means the world for a whole host of personal reasons, but also more general psychological and socially important ones, as well.

I am a fortunate person. I am a person who has friends and resources and a bloody-minded stubbornness that means that when I determine to do something, it will more likely than not get fucking done, for good or ill.

I am a person who has been given opportunities to be in places many people will never get to see, and have conversations with people who are often considered legends in their fields, and start projects that could very well alter the shape of the world on a massive scale.

Yeah, that’s a bit of a grandiose statement, but you’re here reading this, and so you know where I’ve been and what I’ve done.

I am not a monetarily wealthy person, measured against my society, but my wealth and fortune are things that strike me still and make me take stock of it all and what it can mean and do, all over again, at least once a week, if not once a day, as I sit in tension with who I am, how the world perceives me, and what amazing and ridiculous things I have had, been given, and created the space to do, because and in violent spite of it all.

So let’s talk about what that means.

END_OF_DOCUMENT_TOKEN_TO_BE_REPLACED

“We Have Always Been In The Monolith” by Damien Williams

When you take a long look at the structure of 2001: A Space Odyssey, it becomes somewhat apparent that Arthur C. Clarke understood (though possibly without knowing that he did) that 1: humans have been cyborgs since fire, pointy sticks, & sharp rocks; and 2: the process of cybernetic enhancement has only ever been an outgrowth of the kind of symbiosis developed via natural selection.

First demonstrated via the influence of the Monolith on the tribe of Australopithecus and then more explicitly stated in the merger of Commander Dave Bowman and HAL into HALMAN, the opening fourth of Clarke’s quadrology is the first step along a road toward something that would later come to be seen as fundamental to the then-nascent study of cybernetic organisms. Though the term “cyborg” was coined in the 50’s and 60’s, a fuller investigation of the implications of cyborgs would take another 40 years to come to light. The perspective of “Cyborg Anthropology” has taken root through the works of thinkers like Donna Haraway, Amber Case, Klint Finley, and Tim Maly, and it has provided insights at an intersection which, in hindsight, we think ought to have been—but most certainly was not previously—obvious.

In the explicit connection of the cyborg with the anthropocene era, we force ourselves to acknowledge that every human endeavour has been an outgrowth of the dialectic, pattern-centred process of mediation and immediation—of creating new tools to do new (or old) work, and then integrating those tools more and more fully within our expectation of how a “normal” human looks and behaves. Normal humans use tools, at all. Normal humans communicate via standardized language. Normal humans write. Normal humans have a cell phone, a Facebook, a web footprint centred around their purchasing history and social interactions and shared location data; and the implication of this mode of thinking (aside from the obvious judgments made about any “abnormal” human) is that once these become “normal,” they will then have always been normal. It’s just that we’re somehow only just now coming to realize it.

The myth of progress causes humans to seek this determinative Change-Toward, where the idea of “the process of becoming” acts as the modifier of an unspoken, possibly unknown Object State. We are, to steal a Sneaker Pimps title, “Becoming X.” But this teleological view is inconsistent with what we know of nature and the process of adaptation [insert something here about the aforementioned inherently Abrahamic roots of Transhumanist thought and the uninvestigated opposition of adaptation to this determinism]. The question “What are we becoming?” is alluring, but restrictive. We Are Becoming. Life is that process of transmutation from one state to the next. Paradoxically, self-conscious life is so enmeshed in that moment of present-mindedness that we simultaneously cannot a) maintain an awareness of the process of our becoming—that is, of ourselves as anything other than we are and “always have been”—and b) help BUT look to the future of what we desire to become.

We’re consumed with the idea of what we might someday come to be, or what we “will” be. Imagine if, instead, we became aware of the process of ever-present change and self-creation, and modified our future-looking to act as a recognition of our adaptability. Then we’d see that the Monolith didn’t do anything but place our hand and that sharp piece of bone in just the juxtaposition we needed, in order to understand that we were capable of understanding. If the monolith makers in this tale are desirous of anything, it is of the flourishing of adaptable, changeable life—not of a particular Kind of that life, but merely of its existence and expression, throughout the cosmos. In this way, one set of adaptable, self-reflective consciousness goes on to provide the means for the arising of another, and on and on. The Monoliths are tools to create tools which will use tools to create tools to use tools to create tools… But it is equally true that those tool-creating tools are, in the words of Kant, ends in themselves. In fact, they necessarily must be. Their only goal is to flourish and propagate and create the kind of reality in which more of the same can find purchase. They are, thus, to be valued for what they are, because what they are IS what they do.

But this isn’t the end. Haraway said she’d rather be a cyborg than a goddess, and I once retorted “It Can Always Be Both.” Both cyborg nature and apotheosis are about the self-directed, rising spiral of adaptation. In order for that to be true, we have to recognise that nature itself isn’t a passive state of being, but an ever-evolving, constant becoming. Nature adapts so constantly, so thoroughly that it looks like no change has taken place, until—thousands of years later—the differentiation is so vast that it boggles the mind. But now? Now the pace of evolution is so accelerated (or perhaps our ways of looking have simply become able to parse more, more usefully) that we may be able to see it in action. We can tell that there is work being done, in nature, to “refine” itself, all the time, and we can, finally, seek to model ourselves after it.

We may get to the point where the manipulation of the hearts of stars or the molecular composition of gas giants is as easy for us to contemplate and execute as the building of an engine. We may reach a stage where we understand the fabric of space-time as intimately as our own skin, flesh, and bones. We may yet understand how a word or a gesture made at the right time or place can cause ripples and actions in faraway places in what seems like an instant. Mechanisms once thought to be the purview fantasy are coming to us, again, through the applications of science, but this is not to say that technology accomplished what magic could not. Magic is a lens through which to see and interact with the world. It is a set of concepts and symbols which usefulness are determined by their meaning and vice versa. For many adherents, the lens is used for as long as it works, no more and no less, and when it stops working, the next lens is brought to bear. Systematically, technological viewpoints are magic we like to explain.

Whether wearing bear shirts and calf’s blood or lab coats and implanted magnets, the constant becoming of reflexive adaptation is the only thing we’ve ever been—the only thing anything has ever been. This is, in a real sense, the best thing we can ever hope to be. But if the human species has any “final form,” maybe one day someone will look at us and realise that, my god, we’re full of stars.