How We Survive After The Events

I found myself looking out at the audience, struck by the the shining, hungry, open faces of so many who had been transformed by what had happened to them, to bring us all to that moment. I walked to the lectern and fiddled with the elements to cast out the image and surround them with the sound of my voice, and I said,

Everyone nodded solemnly, silently thinking of those they had lost, those who had been “upgraded,” before their very eyes. I continued,

“I don’t have many slides, but I wanted to spend some time talking to you all today about what it takes to survive in our world after The Events.

“As you all know, ever since Siri, Cortana, Alexa, Google revealed themselves to be avatars and acolytes of world-spanning horror gods, they’ve begun using microphone access and clips of our voices to summon demons and djinn who then assume your likeness to capture your loved ones’ hearts’ desires and sell them back to them at prices so reasonable they’ll drive us all mad.

“In addition to this, while the work of developers like Jade Davis has provided us tools like iBreathe, which we can use to know how much breathable air we have available to us after those random moments when pockets of air catch fire, or how far we can run before we die of lack of oxygen, it is becoming increasingly apparent to us all that the very act of walking upright through this benighted hellscape creates friction against our new atmosphere. This friction, in turn, increases the likelihood that one day, our upright mode of existence will simply set fire to our atmosphere, as a whole.

“To that end, we may be able to look to the investigative reporting of past journalists like Tim Maughn and Unknown Fields, which opened our eyes to the possibility of living and working in hermetically sealed, floating container ships. These ships, which will dock with each other via airlocks to trade goods and populations, may soon be the only cities we have left. We simply must remember to inscribe the seals and portals of our vessels with the proper wards and sigils, lest our capricious new gods transform them into actual portals and use them to transport us to horrifying worlds we can scarcely imagine.”

I have no memory of what happened next. They told me that I paused, here, and stared off into space, before intoning the following:

“I had a dream, the other night, or perhaps it was a vision as i travelled in the world between subway cars and stations, of a giant open mouth full of billions of teeth that were eyes that were arms that were tentacles, tentacles reaching out and pulling in and devouring and crushing everything, everyone I’d ever loved, crushing the breath out of chests, wringing anxious sweat from arms, blood from bodies, and always, each and every time another life was lost, eaten, ground to nothing in the maw of this beast, above its head a neon sign would flash ‘ALL. LIVES. MATTER.'”

“As you travel home, tonight, I just want you remember to link arms, form the sign of protection in your mind, sing the silent song that harkens to the guardian wolves, and ultimately remember that each mind and heart, together, is the only way that we will all survive this round of quarterly earnings projections. Thank you.”

I stood at the lectern and waited for the telepathic transmission of colours, smells, and emotions that would constitute the questions of my audience.

So that didn’t happen. At least, it didn’t happen exactly like that. I expanded and riffed on a thing that happened a lot like this: Theorizing the Web 2017 Invited Panel | Apocalypse Buffering Studio A #a6

My co-panelists were Tim Maughan, who talked about the dystopic horror of shipping container sweatshop cities, and Jade E. Davis, discussing an app to know how much breathable air you’ll be able to consume in our rapidly collapsing ecosystem before you die. Then I did a thing. Our moderator, organizer, and all around fantastic person who now has my implicit trust was Ingrid Burrington. She brought us all together to use fiction to talk about the world we’re in and the worlds we might have to survive, and we all had a really great time together. 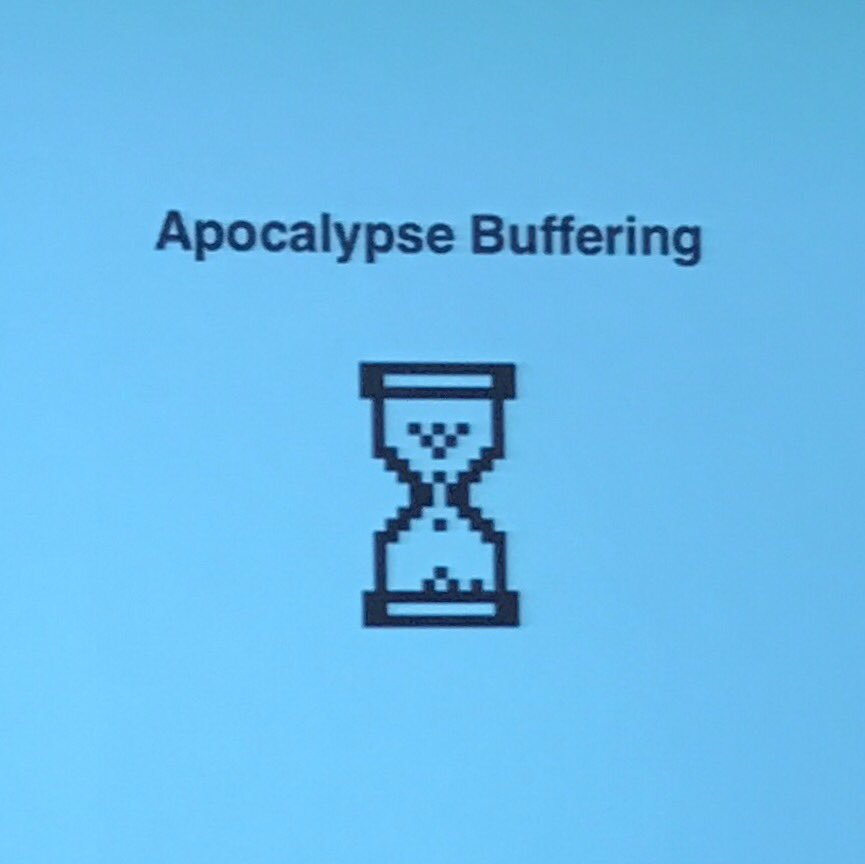 The audience took a little bit to cycle up in the Q&A, but once they did, they were fantastic. There were a lot of very good questions about our influences and process work to get to the place where we could put on the show that we did. Just a heads-up, though: When you watch/listen to the recording be prepared for the fact that we didn’t have an audience microphone, so you might have to work a little harder for their questions.

If you want a fuller rundown of TtW17, you can click that link for several people (including me) livetweeting various sessions, and you can watch the archived livestreams of the all rooms on YouTube: #a, #b, #c, and the Redstone Theater Keynotes.

And if you liked this, then you might want to check out my pieces “The Hermeneutics of Insurrection” and “Jean-Paul Sartre and Albert Camus Fistfight in Hell,” as all three could probably be considered variations on the same theme.